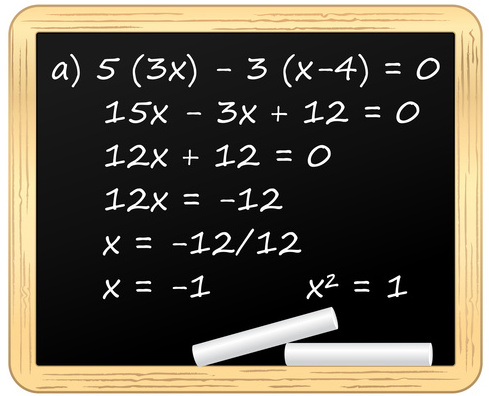 Problem Solving (PS) questions are the typical multiple-choice math questions that you have seen before in school and on other standardized tests such as the SAT. A math problem is presented, followed by five answer choices, one correct and four incorrect. Calculators are not allowed, so you have to do calculations (including long-hand multiplication and division) on your scratch board. But since you have an average of two minutes per question, you are not expected to do tedious calculations. In fact, long tedious arithmetic is rarely the best approach to a problem. Many problems have multiple approaches, with one approach often faster than others.

The problems are based on arithmetic, algebra, and geometry math concepts. Any of these concepts can appear as a word problem, and in fact you should expect more than half of the PS questions to be presented as word problems. There is no trigonometry or calculus on the GMAT. All numbers used are real numbers; irrational numbers are not used.


How to Approach GMAT Problem Solving

In approaching a problem, read the question carefully and fully understand what is asked. Harder questions are sometimes purposely worded in a confusing manner. For word problems, it is helpful to translate the information presented into equations or mathematical notation if possible. In working through the problem, make liberal use of the provided scratch board. Trying to perform calculations in your head can lead to careless mistakes. Be systematic in your approach, organize the information logically, and clearly label everything. This becomes more important as you tackle more difficult problems.

Before diving into the calculations, however, be sure to examine the five answer choices for clues. Incorrect answers are typically not random numbers, but are instead created to ensnare test takers who make a careless mistake or fall into a common trap. Consider the format of the answers, so you know what you are working towards. Look for any similarities or differences amongst the available answers. If the answer choices are numbers that are far apart, perhaps some approximation will make for easier calculations.

Let’s try a sample problem. Attempt the problem on your own before viewing the answer and explanation.

There are three general approaches to this word problem: conceptual, algebraic, and plugging-in numbers. Let’s discuss each in turn.

of the total bill.

We now need to convert this into a percent. But first let’s review the other two approaches, to make the conceptual approach more understandable.

This approach, likely to be taken by intermediate students, essentially puts the conceptual approach into algebraic form. For this algebra word problem, let’s assign variables to the unknowns:

To calculate the total bill, we must multiply price x quantity for each item, and then add the results. We are given the quantities, and can use our variables for the prices:

A common mistake is to write this equation backwards, as B = 9S. But since stethoscopes are more expensive, we need to make the bigger number S equal to nine times the smaller number B. A small number B cannot equal a big number S times 9.

Since the question asks about stethoscopes and not tongue depressors, we want to get rid of B, the variable that we don’t care about. To do this, we need to isolate B and substitute it away. We can divide both sides of our equation by 9 (same as multiplying both sides by

Now let’s do an algebraic substitution into the total bill equation:

The question essentially asks: the price of one stethoscope is what percent of the total bill? We are looking for a percent, as further verified by the format of the answer choices. When calculating a percent, a good approach is to form a fraction with the “is” number on top and the “of” number on the bottom:

We’ll convert this into a percent after reviewing the plugging-in numbers approach.

This approach is likely to be taken by less-advanced students, but is actually a great approach for this problem. When the answers represent a ratio or percent, and we don’t have specific numbers provided within the problem, then a very good technique is to pick numbers and work through the math. We know that the price of each stethoscope is nine times the price of each box of tongue depressors, so let’s pick easy numbers. We do not need to worry about whether the numbers are accurate in the real world, just whether the numbers meet the relationship described in the problem.

Let’s now calculate the total bill, using the numbers we made up for the prices and the quantities provided in the problem.

The question asks: the price of one stethoscope is what percent of the total bill? As mentioned in the algebraic approach, we can calculate the percent by forming a fraction with the “is” number on top and the “of” number on the bottom:

Converting the fraction into a percent:

There are several approaches to convert

into a percent. If nothing else, we could do long-hand division. But there are a couple faster approaches.

. We recommend that students memorize the decimal equivalents of common fractions. So we should ideally know that

Another good shortcut takes advantage of the fact that a percent is equivalent to a fraction with a denominator of 100. So how can we turn our denominator of 80 into 100? We can increase 80 by 25%, the same as multiplying 80 by 1.25. To leave the value of our fraction unchanged, we must multiply numerator and denominator by the same number.

Finally, if we are very short on time and don’t see an easy way to do the conversion, we could at least quickly eliminate three answers by recognizing that:

Our correct answer has to be somewhere between 1% and 2%, leaving only answers C and D. As we have seen above, C is the correct answer.

“Vinay was instrumental in improving my quant performance. He is clear, patient and knowledgeable, with a skill in explaining the same thing multiple ways. If I paid Vinay based on his impact he would’ve been paid a lot more.”