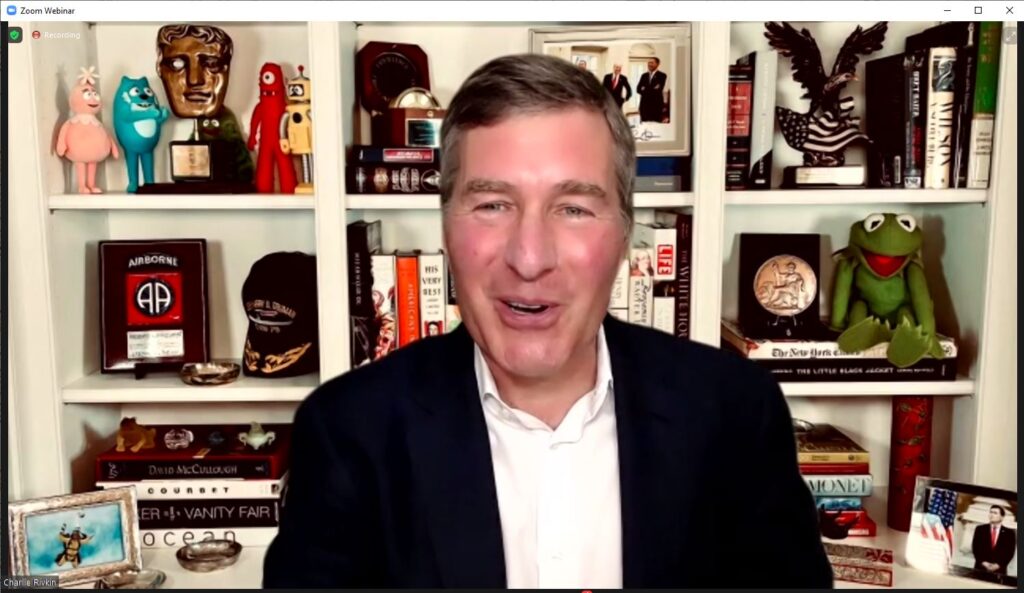 I had the opportunity today to participate in a Zoom call with the Chairman and CEO of the Motion Pictures Association, Charlie Rivkin. Among his many prior roles, Rivkin served as the U.S. Ambassador to France and the CEO of the Jim Henson Company. He has an MBA from Harvard Business School. We had a lively discussion about trends in the entertainment industry and the value of an MBA.

Many people associate the movie industry with movie stars. But Rivkin points out that the industry is filled with over 2.5 million “below the line” blue color workers. Movie-making therefore provides a significant economic boost to local economies. Similarly, piracy hurts many people, not just wealthy stars. Trying to combat piracy is like “whack-a-mole”; when one technology that enables piracy is shut down, another pops up.

Jim Henson, creator of The Muppets, was the most creative and inspirational person that Rivkin knew. He fondly remembered that Henson would bounce ideas off a worker in the company boiler room. When Rivkin asked Henson about this, Henson stressed that you can learn from anyone. Collaboration is important in the MPA. Rivkin has to get the six member companies (Disney, Paramount, Sony, Universal, Warner Bros., and Netflix) to work together on common goals, even though they are business competitors. Of particular importance now is the trend to streaming and other alternate delivery mechanisms.

Rivkin’s Opinion of an MBA

I asked Rivkin how important an MBA will be for young professionals who wish to pursue a career in the entertainment industry. He said that he considers an MBA essential. An MBA gives you a chance to think about where the world is heading and how you can contribute. Rivkin also believes that you will learn valuable skills that you won’t be able to learn on the job. Even though an MBA is not a traditional path for a career in the entertainment industry, Rivkin highly recommends getting an MBA.