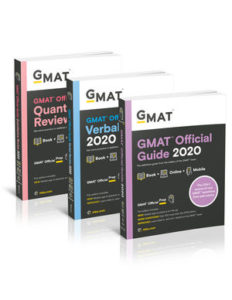 That most of the added questions are on the cusp of Easy and Medium difficulty leads to an interesting implication. The covers of the Official Guides state that questions are “organized in order of difficulty from easiest to hardest.” Using Problem Solving in the Quant Official Guide as an example again, the 26 added questions appear as a block from #77 to #102. It is exceedingly unlikely that all 26 of the questions added in 2020 are harder than #76 yet easier than #103.

We discussed this issue with the GMAC. According to GMAC’s Director of Test Prep Products, “We categorize and order questions by difficulty levels (easy-medium-hard), but the order within these difficulty levels is less precise. While there has always been some amount of imprecision in the order, it’s perhaps more pronounced with the inclusion of questions from both older Official Guides and new ones, because the data that we have on the questions may not be entirely comparable across all questions.”

So there you have it, straight from the GMAC. There is understandably some subjectivity in assessing difficulty and therefore in deciding the order in which to place questions. The big takeaway, however, is that we should interpret the “in order of difficulty” claim loosely rather than strictly.

Removed Questions from the 2019 Official Guides

We are disappointed to see that 17 Hard-difficulty questions are getting removed (all from the Verbal OG), but that there is not a single added Hard-difficulty question in the 2020 GMAT Official Guides to compensate for this loss. We are at least glad to see that the Critical Reasoning question that was duplicated in both the 2019 Main and Verbal Official Guides is one of the removed questions.

The Official Guides are an essential source of GMAT practice. GMAT Genius highly recommends that every GMAT test taker prepare using the Official Guides. Overall it’s great that the 2020 GMAT Official Guides provide GMAT aspirants with 130 additional Quant and Verbal practice questions (primarily Data Sufficiency and Critical Reasoning) versus the 2019 OGs. Although most of these will be questions from older Official Guides, this shouldn’t be a concern for most GMAT students, who are unlikely to have multiple editions.

For those with high scoring objectives, however, it’s disappointing to see a net loss of 17 Hard-difficulty questions in the 2020 GMAT Official Guides. Furthermore, almost all the added questions are either Easy-difficulty or on the easier side of Medium-difficulty. So these new Official Guides provide minimal added benefit to advanced students, who will be just as fine using the 2018 or 2019 editions.