I had the pleasure of meeting Stanford GSB Dean Jon Levin yesterday in La Jolla over lunch. We previously met last March. This time, we had a splendid discussion about some of the trends that he considers vital to the future of business education and at the GSB in particular. These involved two primary themes: technology and the “challenge of opportunity”.

The expansion of technology continues to create greater opportunities in business, but also creates some challenges. One of the biggest challenges according to Dean Levin is that of privacy. Business leaders need to think through privacy issues inherent in their product and service offerings in order to protect their customers and employees and to maintain trust with these stakeholders. This has led to changes in the types of skills that future business will need. Dean Levin referred to this as the “ascendency of the MBA skill set.”

What skills will take on greater importance for business leaders? Dean Levin believes that collaboration and teamwork, leadership, and analytical skills will be essential to manage projects that will inevitably be of greater scope and complexity. Furthermore, business leaders will need to be versed in data and information management. Ethics will also play a role, as leaders need to think about how to deploy technology in a responsible manner. The GSB is adapting to these challenges through curriculum changes. Data Science is now a required course for all first-year students. Courses such as Startup Garage have incorporated an ethics component. Electives are being added in Artificial Intelligence, such as the AI and Humanity course taught by Professor Jen Aaker. Finally, a Stanford-wide human-centered AI initiative is expected to launch in March.

Dean Levin believes that liberty and opportunity are two great features of capitalist economies. But this leads to the “challenge of opportunity” – are we creating enough opportunity in society? This is an important question in training the next generation of business leaders. As such, the GSB emphasizes “purposeful leadership” as a theme. Future business leaders need to understand their role in creating equal opportunities in society. This entails teaching the importance of values and responsibility. The GSB is incorporating this topic in its curriculum through class discussion as appropriate. The GSB is doing its own part to broaden access to a Stanford MBA by offering more fellowships so that financial constraints don’t prevent worthy candidates from attending the GSB.

Finally, we talked about globalization as a further challenge that business leaders need to manage. The current first-year class at the GSB hails from 60 different countries, allowing for greater discussion of global issues during class. As more opportunities for healthy debate arise, Dean Levin believes that it is important for students to engage in a respectful manner: stay calm, listen openly, and clearly articulate their thoughts and vision. 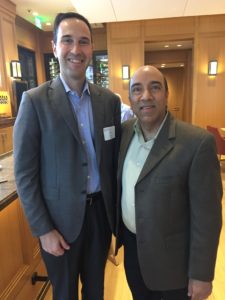 I had the opportunity to meet the new Dean of the Stanford Graduate School of Business, Jon Levin, yesterday morning over breakfast. Dean Levin shared a lot of insight about admission trends at the GSB, factors that make Stanford a leader in business education, changes underway at the GSB, and his vision for the future of the GSB.

The class size at the Stanford GSB has grown at an average of 1-2% per year. With 418 students matriculating in Fall 2017, the GSB has reached maximum capacity, despite the growth afforded the GSB with its relocation in 2011 to the new Knight Management Center. Stanford’s incoming class last Fall included 41% international students, representing 61 countries, and 40% female students. Dean Levin hopes that the GSB can increase the female percentage closer to 45% (consistent with some Chinese MBA programs) under Kirsten Moss, the new Admissions Director at Stanford.

The full-time MBA applicant pool for U.S. programs overall has declined by 30% over the past five years. Only Harvard and Stanford have been immune to this trend and have seen a growth in applications. Last year the GSB accepted just 5.9% of its applicants, its lowest acceptance rate yet. Over 85% of those accepted ended up matriculating. The biggest source of competition for accepted students is not other MBA programs, but rather job opportunities that these applicants have. Dean Levin recognizes that Stanford must demonstrate the ROI from its MBA program in order to maintain such a high yield rate.

This past year represented the first admissions cycle under Admissions Director Moss. Dean Levin expects that Moss will reevaluate the admission process before the new admissions year. One change that Stanford has already implemented is supplementing the traditional alumni interview with more structured staff interviews.

Stanford has recently been in the news for its financial aid policies. Dean Levin readily admits that the GSB previously lacked sufficient protection over sensitive data, a deficiency that has since been rectified. Dean Levin also agrees that the GSB needs to be more transparent about how financial aid decisions are made. Yet the issue has been presented a bit inaccurately by some media outlets. At most other MBA programs, a substantial portion of financial aid grants are discretionary and are specifically structured to draw candidates that the program deems attractive. In contrast, the GSB determines the total amount of financial aid for each candidate strictly based on a needs-based formula. What has been discretionary at the GSB is the split between loans and scholarships, not the total amount of aid given. Going forward, Stanford will be more explicit about how these types of decisions are made.

What Sets the GSB Apart

What sets the GSB apart from its peers? Stanford offers a more immersive learning experience than other MBA programs, and Dean Levin expects this trend to accelerate over the coming years. Almost 50% of GSB classes are experiential based. Many classes have co-teachers, a traditional professor paired with an expert in industry. One example of Stanford’s commitment to experiential learning is its innovative two-quarter Startup Garage course, during which students design and can actually launch startup companies. Last year, over 70 second-year GSB students participated, creating several viable new businesses.

New classes are often driven by student requests and the latest faculty research. Two such examples are upcoming classes on Blockchain and on Artificial Intelligence. Stanford also offers many short two-week courses that allow students to dive into specific topics that wouldn’t present sufficient content for a full quarter. Furthermore, this format allows Stanford to attract highly-qualified lecturers from industry who could not dedicate a full quarter to teaching.

Over 20% of GSB students take advantage of the opportunity to pursue a joint or dual degrees at Stanford. The most popular joint degree has been with the School of Education. Other students pursue joint degrees in Law, Medicine, or Environmental Sciences. Dean Levin anticipates a greater interest in the future for joint degrees in Public Policy, as Stanford improves its offerings in this area, and in Engineering, due to the valuable skills that this combination would provide.

Dean Levin is part of a new leadership team at Stanford University overall. Stanford has a new President, a new Provost, and four new Deans at its various programs. I had the opportunity to meet Stanford University’s new President, Marc Tessier-Lavigne, a week and a half earlier. President Tessier-Lavigne, Dean Levin, and the other leaders at Stanford are currently involved with a long-term planning process to help shape the future of Stanford. Based on what I’ve heard from President Tessier-Lavigne and Dean Levin, I am confident that the future of Stanford and the GSB rests in excellent hands.